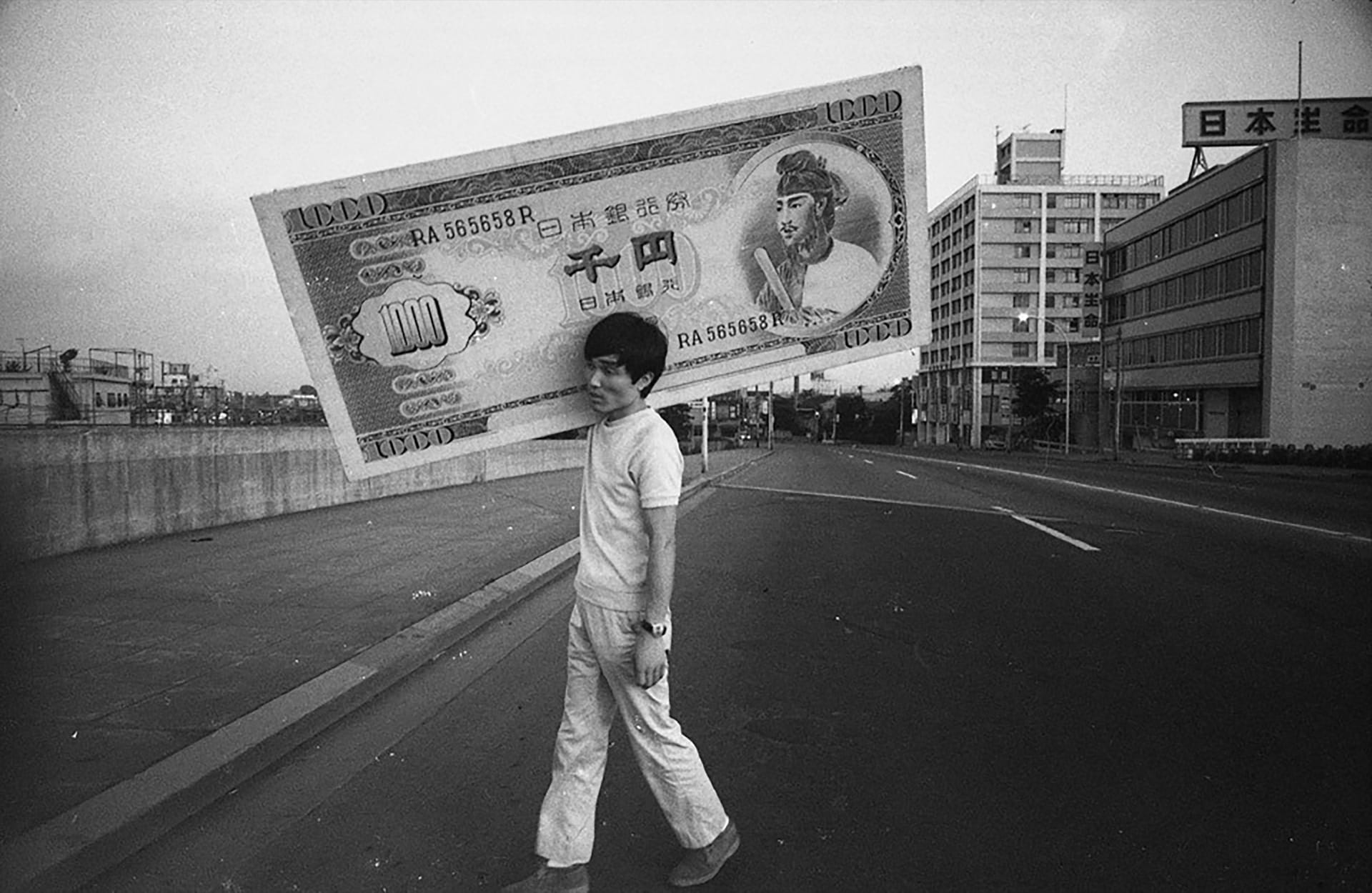 Akasegawa: The Imperfect Face of Reality

In thriving Japan of the 1960s, an artist decides to rebel against the westernisation of his culture by using banknotes as his creative medium.

Post-war Japan had become the promised paradise with a growing consumerism and the promise of a better urban life, optimism was high and prosperity was within reach. However, behind this idyllic façade was a not-so-pleasant one: The accelerated economic recovery was a direct consequence of the invisible alliance with the United States and a product of the Cold War. It was precisely this invisibility that worried several Japanese artists, including Katsuhiko Akasegawa.

Genpei Akasegawa (artistic pseudonym) began his artistic career in the early 1960s. His art using Japanese currency as a medium was symbolically intended to undermine the value of the legal tender, injecting uncertainty into the sacred status of the banknote, revealing its illegitimacy as a protest against the country’s increasing proclivity toward capitalism.

During the early 1960s, high-quality counterfeit 1,000-Yen banknotes circulated widely in Japan, known as the Chi-37 counterfeiting scandal. In January 1963, Akasegawa sent Japanese Cash Postal envelopes with invitations to his solo exhibition in Tokyo. The invitations were a monochrome reproduction of the 1,000-Yen bill depicted on the front, with information about the upcoming exhibition on the back.

Akasegawa used copies of the 1,000-Yen bill as wrapping paper, wrapping everyday objects for a series of artworks called “Packages.”

In March of the same year, Akasegawa exhibited, as part of Yomiuri Independent, held at the Tokyo Metropolitan Museum of Art, an unfinished version of “The Morphology of Revenge: Look Closely at the Adversary Before Killing Him” (enlarged 1,000 Yen bill). The work consisted of a 90×180 cm ink drawing of the 1,000 Yen bill. He also pasted on the wall life-size prints of 1,000 Yen single-sided.

Akasegawa participated in a collaborative exhibition at Shinjuku Dai-Chi, where four strips of his 1,000 Yen banknote prints were hung from the ceiling with cutting marks along a dotted line. This art piece was so popular that visitors cut them off and they had to be replaced during the exhibition. Several works made from individual banknotes were also presented, including an enlarged 1,000-Yen bill.

A year later, in January, the Japanese police became interested in his prints of 1,000-Yen banknotes. On January 27th, the Asahi Shimbun newspaper published an article about the police investigation a “young artist and self-styled member of the avant-garde,” in connection with the Chi-37 counterfeiting scandal, inferring that Akasegawa was involved in the counterfeiting conspiracy.

February 24th, Akasegawa published in the Dokusho Shimbun newspaper: “Theses on ‘Capitalist Realism,” responding and presenting his theory after months of experimentation questioning the order of reality highlighted in the Asahi article and the intimate interaction that “real” money has with people.

He pointed out, “Even if we know intellectually what the monetary system is, the ‘perpetrator’ – the currency – constantly overshadows us, clings to our work and our actions like eyelids to our bodies, and before our eyes sneaks into our wallets/our beings and, aided by the speed with which it circulates despite our wishes, without time to look it in the face, wraps us in the long rope it drags.”

Akasegawa explained that his own printed banknotes were imperfect money semblances. Neither real nor fake and with no intention, nor potential to be used as money. In his view, they fall under another term: “models”.

Police ruled out his connection to the Chi-37 counterfeit, however he was charged with “creating imitation banknotes,” and then “currency simulation,” which, while different from counterfeiting, still constituted a violation of the law, based on his partial reproduction of the 1,000 Yen bill.

Thus began a trial that would last several years.

In June, Akasegawa was convicted and given a suspended sentence. Six months later, he created a “worthless work of art” in protest of his conviction. That work, modelled after an old 500- Yen bill, shows Iwakura Tomomi’s face removed from the portrait, a central value of 0 Yen followed by a value of 000 in each corner. The other side includes portraits of Johannes Gutenberg, Faust and Schaeffer.

Throughout the trials and appeals, Akasegawa’s artist friends used the courtroom to debate the meaning of art. Two issues brought to this trial were whether Akasegawa’s reproduction of 1,000- Yen banknotes constituted “art” and whether “art” was protected by freedom of expression, so it was not a crime.

In 1970, Japan’s Supreme Court ultimately ruled against Akasegawa. Although his work was considered “art,” producing that “art” also constituted a criminal act.

Akasegawa dubbed the whole incident as the “Thousand Yen Bill Incident”, vindicating it and considering the whole political debacle as part of his artwork.

“Anti-art” as a defence of identity

Akagesawa is recognised as a critical and exceptional artist in the Japanese avant-garde movement and contemporary art world. He was an award-winning novelist who crossed over into the broader realm of popular culture.

His work is identified as “Capitalist Realism”, a term used in Japan and Germany during his time. Akasegawa participated in a broad movement amongst Japanese artists called “Anti-Art”, deliberately avoided the terms “art” and “works of art” to describe his works, preferring to use the term “models”.

Akasegawa is a Money Artist who used Japanese banknotes as a means of protest, a vision he strove to defend. His works are shining examples of how Money Art can be used to reinvigorate identity and culture.