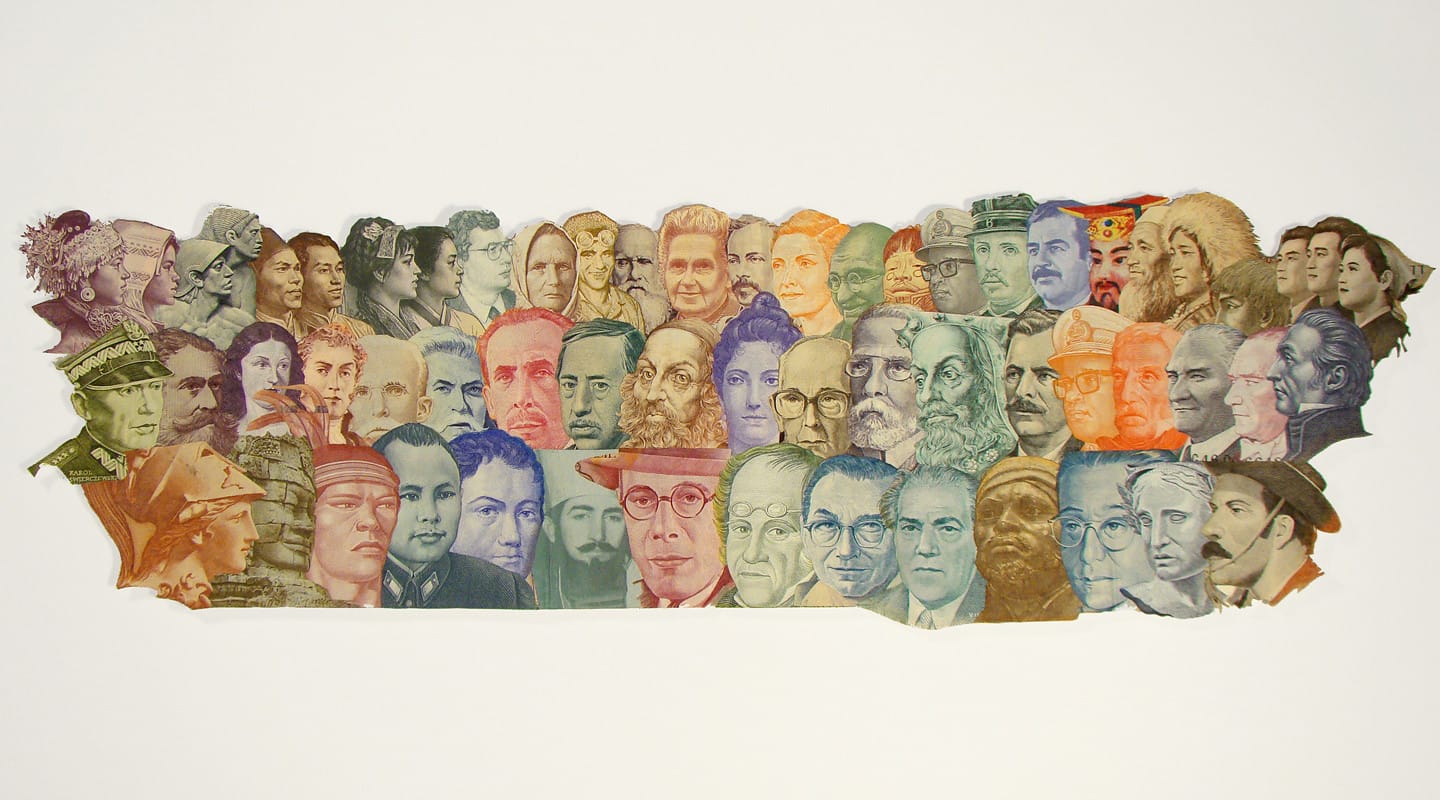 Collage permits viewers to see how the artist has disrupted the usual order of the way that things are represented which gives an element of surprise, delight, and provocation. This is at large part of its appeal for collage driven artists to explore possibilities, challenging social and at times political commentary, beauty and whimsical art for more than a century. Today, artists continue to push boundaries including ours.

Whether purposefully or randomly composed, the juxtapositions between images and objects created by the collage technique have long intrigued artists, images take on new meanings in new contexts, and collage can subvert traditional meanings and at the same time multiply meanings, creating works that don’t easily settle into a single fixed analyses.

The term collage derives from the French term papiers collés (or découpage), used to describe techniques of pasting cut-outs onto various surfaces. Papier collé translates as ‘pasted paper’ and refers to the exclusive use of paper stuck onto a flat surface, as opposed to collage, which employs different materials. Allegedly it was first used as an artists’ technique in the early twentieth century however some dispute this as true.

Collage is an art form that is made up of overlapping pieces of material, such as photographs, fabric, coloured and textured paper and other types of mixed media. The process focuses on the act of selecting materials and cutting them into the desired shape, arranging and pasting onto a surface. Other art forms that may rely on proficient technical skills which may require more time to master, such as painting and sculpture, the artistic expertise of collage lies in the choosing, arranging, affixing, creativity, vision and imagination

Picasso’s Still Life with Chair Caning (1912), transformed the art world and defined preceding avant-garde art movements. This piece is an early example of using everyday objects in collage, he incorporated painted elements, and oil-cloth printed with a chair caning pattern, and used rope as a frame. Using these everyday items in a work of art signalled a dramatic move away from the traditional confinements of fine art practice, towards the blurring of art and everyday culture.

Collage in all of its forms, acted as a revolutionary medium which defies high art standards and rejects bourgeoisie culture.

There are six other distinct art forms and techniques associated with collage. Despite their differences, a recurring theme runs through each style – anti-aestheticism and a sense of elevating the everyday into the realm of high art, which defined many avant-garde movements of the early 20th Century.

Picasso and Braque were both making papiers collés at the end of 1912 and beginning of 1913, often incorporating newspaper clippings as a way of blurring the distinction between high art and the everyday.

Assemblages found objects in 3D compositions. This process was originally inspired by the Surrealists who made absurd objects based on Sigmund Freud’s writings on dreams and the unconscious. The method of assemblage went on to inspire Dada artists such as Kurt Schwitters (20 June 1887 – 8 January 1948) who created large-scale compositions out of found objects and materials in non-hierarchical and nonsensical arrangements.

Décollage is a French word meaning to unstick, which involves tearing away built-up advertisement posters to reveal images and words below. This term is largely associated with the nouveau réalisme movement founded in 1960.

Montage is assembling images which are related to one another in a composition and photomontage is using photographs.

Photomontage is a powerful tool for social commentary as artists manipulate and edit images from mass media therefore recreating a new meaning.

There are many accomplished collage artists working in the photomontage style. Benjamin West is a UK based multi-disciplinary artist and photographer who creates work inspired by nature and ecological issues, motivated by the relationship between human activity and nature. He uses photomontages to demonstrate how natural and man-made elements interact and often juxtapose.

Australian-born Kareem Rizk is recognised for his distinct style of collage as a mixed-media artist. Nostalgia plays a key role in his beautifully warm-toned works, which feature vintage materials, such as postcards and book clippings, to transport you back in time.

The art of collage is not just about cutting and pasting. For collage artists, the reigning motif of the singular genius creating beauty from nothing has been replaced by an endless sea of images and influences, hungry to be snatched up, transformed, remixed and spit out. The collage-based works interweave images that stem from personal experience, the imagination and the unconscious mind.

Mark Wagner has explored collage using money, portraits were among the first images he made from dollar bills. Taking an object of public value and turning into an image of personal value. pushing the boundaries of the use of money and our perception of what money is worth.

“Collage is not a medium…it is a method. It is more of a verb than a noun. Collage does not imply any specific material but an activity. One can collage with text, sound, moving images or architecture…as well as with cut-up paper and recycled objects.”

Collage describes both the technique and the resulting work of art in which pieces of paper, photographs, fabric, three dimensional objects and other ephemera are arranged and resurfaced. As artists began exploring the practice throughout the 21th century, these mediums became more varied and increasingly experimental.

Joey Colombo is a self-taught creative from California, he creates exquisite and intricate collage works featuring currency. What started simply as a doodle on a dollar bill, has since grown into a complex and flourishing art form.

“Money is all about control; who has it, who wants it, how to get it and keep it. The power of my art lies in the act of cutting up the very device of control and in that process transferring that power and making it my own. By taking an object we hold treasurable and transforming it into an object of art, I am both reducing its inherent and practical purposes, and empowering a secondary significance and value.”

Using money in collage allows the artist to challenge the viewer’s concept of money’s worth, to review their concept and perception of money.

“I release and reimagine them through my own vision into objects that have never existed. Each bill and the pieces they assemble into take on a new and transferable value.”

Carlos Aires obliquely addresses issues surrounding individuals living on the fringe of society and the psychological impact of that lifestyle.  His work incorporates photography, sculpture and installation with a fun and festive aesthetic behind which lies a content of social and political critique.

American born C.K. Wilde states, “The process of researching all these subjects has created a feedback loop: one idea begets a hundred more. I use banknotes from all eras and nationalities – from failed states and occupying army currencies, to our own ubiquitous and quotidian U.S. dollar bill. Currency collage can be seen as nostalgia for a time when the symbol of powers’ symbol (money) was still manifest in the physical world.”

Brazilian artist Rodrigo Torres has been deconstructing international paper currencies to form intricate collages of color, line, shape, and texture for several years. Torres’ works are masterfully intricate, as the artist isolates out curves, characters, architectures, and geometries from the delicate designs on money, cutting and slicing them apart only to piece them back together into his own careful constructions.

Today, many young artists continue to work with collage. It is a language of its own, a specific way of thinking, seeing, working and being. Watch it evolve into our digital world. Collage Art has the ability to tell the story of each different artistic generation through the commentary it creates, which allows for truly fascinating works to be created. 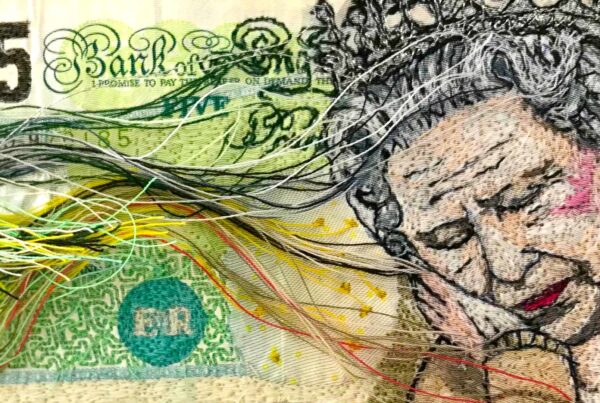 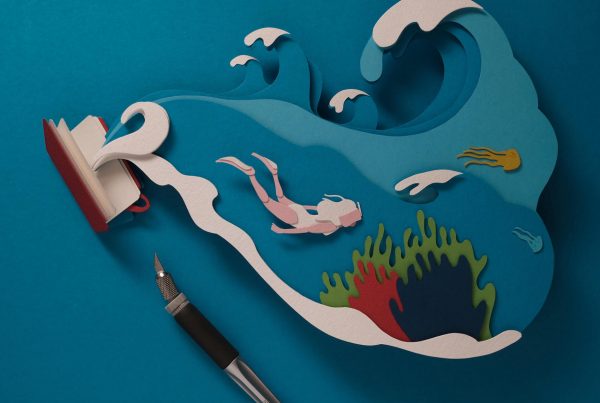